Another great season of theater in southern Utah is approaching. Offerings this year include perennial favorites The Merchant of Venice and The Merry Wives of Windsor as well as Henry VI Part One and Othello. No doubt the latter will be great; I, alas, cannot go to it. Othello for me is too tragic, Iago too evil, the pathos too deep. It is, as it were, a tear too far for me. The others, though, “Bravo!” in advance, especially The Merry Wives, a downright rollicking play.

Other offerings include Roger Miller’s Big River, a musical depiction of Huckleberry Finn; The Foreigner, about a visitor who pretends to not speak English and so overhears what he shouldn’t (reminiscent of What The Deaf Man Heard); The Liar, about a master who cannot tell the truth and a servant who cannot lie (oh, the possibilities!); An Iliad, about, well that’s obvious; and Pearl’s In The House, a musical about the great Pearl Bailey.

The award-winning Utah Shakespeare Festival is reliably excellent, so start making plans now for a week, or long weekend, of great theater starting June 28 and lasting through September 8, with an abbreviated Fall schedule from September 11 through October 13. Please visit the following site for more details and to reserve your tickets: 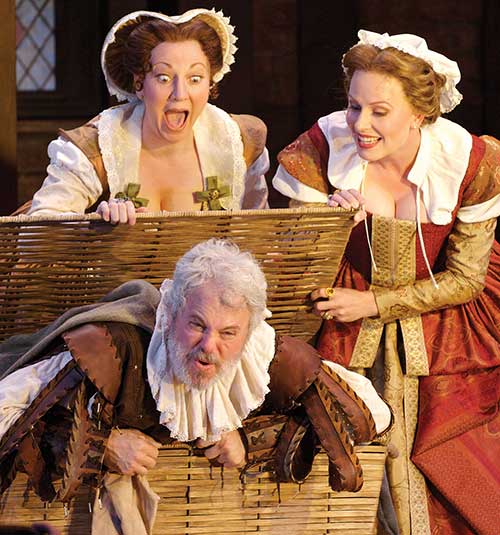 It is generally good for a laugh to say that a professional writer has no rules. It’s not true, of course, and a number of great writers have made lists of rules which they follow with varying degrees of faithfulness. The lists might be summed up by saying that the One Great Rule of Writing is to communicate clearly. Therein lies the rub, for communication involves much more than conveying data from one brain to another; a laundry list can do that. Writers, especially fiction writers, have a host of associations connected to those data, ranging from subtle or not so subtle implications to the deepest emotions, and conveying those is a real challenge.

Available tools for that deeper and broader communication vary with the language, which partially accounts for the difficulty of translation. English has an especially wide vocabulary and variety of idioms to aid in the task (and to confuse the foreign learner). This is reflected in differences in style and usage from one English speaking country to another, American versus British for instance, and in changes over time; the writing of Hawthorne is strikingly different from Hemingway, or even Twain, though all worked in American English. Quite different products, each well communicated.

I recently ran across an excellent discussion of the uses and abuses of language, specifically referencing political writing, authored by none other than George Orwell, one of the best writers of the 20th century. He includes some egregious examples which may evoke great groans of laughter. A link to his essay is below, but first, his list of rules:

Good rules. Let us pledge to follow them more fully. And here’s that link:

The summer season of the wonderful Utah Shakespeare Festival in Cedar City is well underway, but there is plenty of time to add it to your vacation itinerary. This year’s selection includes Romeo and Juliet, As You Like It, and A Midsummer Night’s Dream, all perennial favorites. You may also enjoy Shakespeare in Love, an adaptation of the movie and a regional premier. Other regional premiers are Treasure Island and William Shakespeare’s Long Lost First Play (Abridged).

On the musical side of the house is the great Guys and Dolls, subtitled A Musical Fable of Broadway. Finally, there are two world premieres, The Tavern, a comedy by George M. Cohan adapted and directed by Joseph Hanreddy, and How to Fight Loneliness by Neil LaBute, characterized as “for mature audiences”. Two of our favorites return as directors, Brian Vaughn with Shakespeare in Love and David Ivers with How to Fight Loneliness.

The Utah festival produces consistently excellent theater. You cannot go wrong in this beautiful mountain setting, about a 50 minute drive from St. George or three and half hours from Salt Lake City. The summer season goes through September 9th, with a shorter fall season running from September 13th through October 21st.

For schedule details and to reserve tickets, go to:

Also an enticing peek at next year:

2018 will see performances of The Merry Wives of Windsor and Othello, as well as Big River, a musical adaptation of Huckleberry Finn with music by Roger Miller, bound to be a delight. 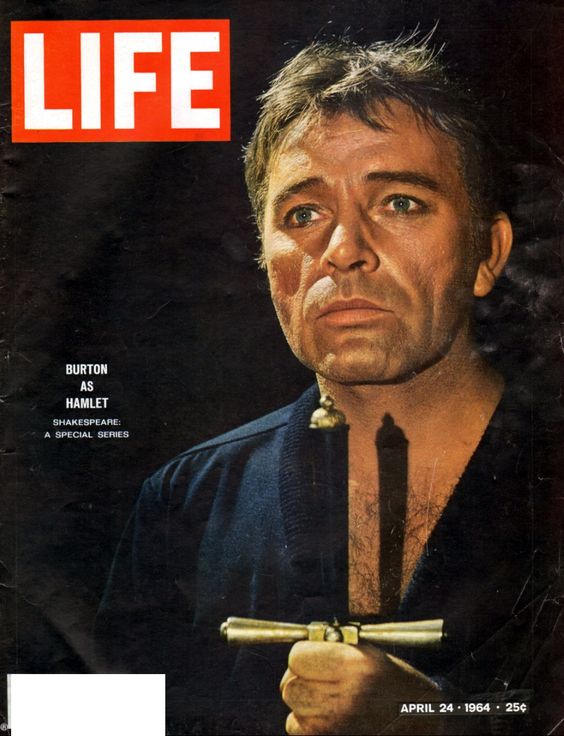 Tim Miller has written a very nice, insightful discussion that relates to the overall purpose of life as a time to learn, to grow, to become more than we were before.

Or to paraphrase David O. McKay, it is what you are thinking about (and I would add, doing) when nobody is watching that reveals who and what you really are (and determines what you will become).

The disgusting bias of the major news media in the recent election may give us pause to consider the difference between journalism and propaganda.

Those of a certain age will recall classes in school–yes, public schools–about how Nazis and Communists and other -ists manipulate their messages to mislead the masses. That was during the height of the cold war and was important so the American people could more easily discern truth from error. More recent generations have not been given such information, just as they have long since stopped hiding under desks during air-raid warnings.

In the end, all such tools, just as the -isms which use them, are means to a common end: the exercise of power by one group over another. This was one of the themes of my book, All Enlisted, and is perhaps the dominant theme of all history.

An excellent review of how journalism becomes corrupted follows:

Writing radiology reports all day and realizing that some poor fellow out there will have to read them, one can’t help but want to simplify things. That should mean shorter, more direct and specific words as well as shorter sentences, even fragments. But linguistic habits are hard to break. I find one phrase and word particularly annoying, namely, “osseous structures” and “osseous”, meaning “bones” or “bony” respectively.

Which I think sounds too ostentateous.

It seems quite preposeous to use that word osseous;

It makes me feel downright pomposseous.

I prefer the Germanic word bony,

Which sounds to my ear much less phony.

But diction is a sensitive matter,

We all prefer to hear flatter,

So this rhyme is meant only gently,

To suggest an edit more aptly,

I persuaded me, and now perhaps thee,

But how to convince all and each crony?

Lisa and I first attended the Utah Shakespeare Festival in Cedar City, Utah, in 2003 on the recommendation of a friend. (It was called The Utah Shakespearean Festival in those days. I am glad they dropped the –an, which always bothered me. I usually dropped it myself anyway.) We were pleased at the consistently high level of professional theater we found there and promptly became area representatives for the Festival, those local people who talk it up when they can and distribute brochures with schedules and so forth. We went every year for a time, but the last few years work schedules prevented us until this past week: Ah! What a delight to be back! 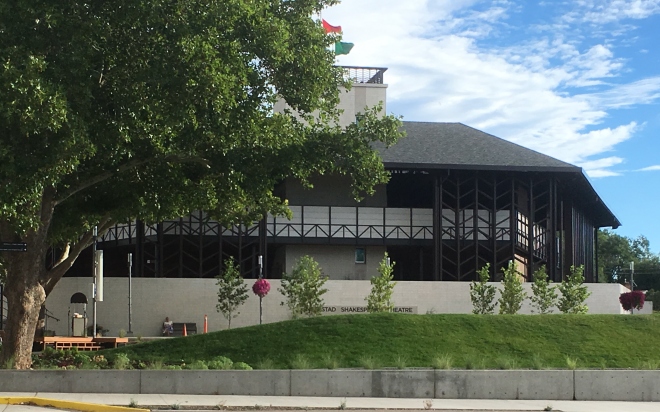 Again for logistical reasons, our playlist consisted only of comedies this year (we skipped Julius Caesar and Henry V) namely: Murder For Two, a wonderful production consisting of only two highly talented and versatile actors, one of whom in his time plays many parts; Mary Poppins, featuring excellent music and two remarkable 9 year olds playing the Banks children, and yes, Mary does a fine job of flying; The Three Musketeers, a well condensed edition of the swashbuckling novel; The Cocoanuts, a recent revival of the hilarious Marx Brothers/Irving Berlin musical filled with sight gags and puns (Aristotle notwithstanding, they are very funny); and Much Ado About Nothing, a perennial favorite, very well done and always a joy. Though quite different, the performances were uniformly excellent.

This is the inaugural year of the new Beverly Taylor Sorenson Center for the Arts, which houses the Utah Shakespeare Festival on the edge of Southern Utah University campus. It includes the Anes Studio Theatre, an intimate venue for theater in the round and experimental productions; the Jones Theatre, equipped with all the tools any stage manager and director could desire; and the Engelstad Shakespeare Theatre, recreating the feel of the 17th century without the smells. The latter replaces the Adams Memorial Shakespeare Theater, the future of which is unclear. Dear to our hearts, we walked around the old theater and recalled the happy and inspiring times we experienced there, one of which was meeting Fred Adams, the founder of the Festival whose vision led audiences from a temporary wooden platform on the grass in 1962 to the Adams Theater in the 1970s and now to the Sorenson Center. Well done Professor Adams!

One regret. We missed seeing The Odd Couple, a Neil Simon play starring two of our favorites, David Ivers and Brian Vaughn. It will run September 14-October 22. They are artistic directors now, but we first saw them as actors in 2003 when both played in Much Ado About Nothing. We were immediately taken with their talent. In The Odd Couple they will alternate between the roles of sloppy Oscar and neat Felix, one night playing one, the next night the other. Hmm. Perhaps we will have to find a way to make a run to Cedar in the Fall. For at least two nights.

This is the 400th anniversary of cousin Will’s death. We are grateful his spiritual descendants are alive and well. For more information on the Utah Shakespeare Festival, go to http://www.bard.org/ 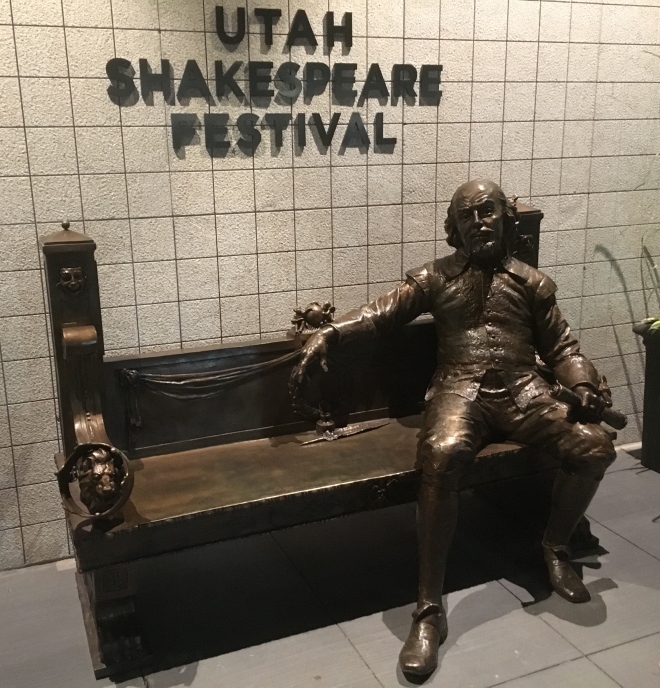 This is the cover of my memoir, available on Amazon. The picture is of Salzburg in winter, perhaps the most beautiful city in the world.

Order Now or Read a Review